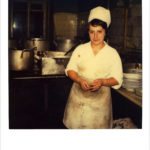 John Lucas began taking photographs as a young student and continued through his doctoral studies, taking street images of life around him in England and while traveling in Europe, Turkey, and Morocco.

But during the 1970s he gave up serious photography, finding it incompatible with the demands of his scientific career in physics.
Then, on a journey to Russia in 1981, he took a series of Polaroid photographs in a coffeehouse.

" While this project was pursued with characteristic intensity, it took until 2007 to bring it to life through a combination of a strong sense of ‘unfinished business,’ advances in digital processing, and most precious of all, time," Lucas says.

A series of his photographs, Soviet Restaurant Polaroids, is featured at the Griffin Museum at Digital Silver Imaging, 9 Brighton St., Belmont, MA.

The project began when Lucas was in the Russian coffeehouse and used his Polaroid to take a picture of the cake he had been served.

" Within seconds of the camera’s flash I was mobbed with desperate requests for portraits by a clientele steeped in the privations of a Soviet winter," Lucas says. " The demand was clearly insatiable, even with my generous supply of film."

" At this point, I felt I had two choices; to abandon the cake and run, or to impose order on the situation. Without a word of Estonian or Russian, the unique character of Polaroid photography served as my language for convincing an apprehensive waitress to pose for a photograph. This was perceived as our arrangement and the commotion evaporated."

Decades later, Lucas explains, " I set about changing the small images of women and the food they provided into 16-by-20- inch giclee prints, using scale to transform the obsolescent icon of the Polaroid image into a defiant gesture. Rather than restore the original colors I sought dramatic effect through a richer palette."

The Griffin satellite gallery, which had been at 4 Clarendon St. in Boston’s South End, has moved back to its renovated and expanded space in Belmont.
The exhibit is open to the public Mondays through Fridays, 9:30 a.m. to 5:30 p.m.