Our current slate of exhibitions close Sunday July 3rd. The museum will be closed July 4-6 to install the new shows. We look forward to seeing you again on Thursday July 7th!

The Griffin Museum continues to bring creativity to the photo community through our Artist Conversations. May 17th is the next installment, presenting photographer Bill Franson. The conversation will focus on his series of photographs along the Mason Dixon line. Hoping to get a preview of this what promises to be an engaging conversation, we asked Bill a series of questions. For more information and tickets, see our events page for more information.
What drew you to the Mason Dixon line to create this series. Why did you not take a more traditional tack and follow the line? What was it that led you to its periphery?
My older son was in college in N. Carolina and every year I’d travel down to drop him off or pick him up and during the solo portion of the trip I would slowly wander, taking a few days photographing along the backroads of the South. Crossing the Maryland/Pennsylvania border I’d usually see a Mason Dixon sign and I got curious and discovered the Line predated the Civil War by one hundred years, predated the Revolutionary War by about ten.

How could that be, when most of what we hear about the Mason Dixon Line is related to the Civil War? It was fascinating to discover that the intention of the line was to end a violent land dispute between two families, the Penns and the Calverts, whose land grants were ill defined. The astronomer Charles Mason and surveyor Jeremiah Dixon were sent from England to “draw” the line, utilizing the stars to establish their position. By the early 1800s the Mason Dixon Line was already considered a demarcation between free states and slave states, now a dispute over human property. Land as property and slaves as property and never mind the indigenous tribes!

Granite mile stones were placed every mile, larger crown stone every five. My original intent was to discover as many of these stones as I could, an attempt to touch history, and simply look around and see. I discovered two things. One is that over time property overlaid property, and many of the stones were not publicly accessible. The second is very few roads follow the Mason Dixon Line, which leads me finally to answer why I photographed the periphery. Because it is what I could do. It was very exciting to come across a mile or crown stone but much more exciting to park my car in a border town, wander, and photograph what caught my eye. As I followed the line west or south, I was literally spinning circles over the line, stopping, wandering, moving on.

The Mason Dixon Line lives in a historical context like a story in a book, for most Americans. Your work is not to document the line so much as to explore the edges. How do you seek to visualize the line in context of that historic demarcation?

The Mason Dixon Line is as mythic as it is historic, and the line is blurry between the mythic and the historic. If I am working within a documentary tradition I am, with all humility, following Walker Evans, and Robert Frank. Photographs can describe accurately, and suggest poetically. I’m all for the later, within the former. I never want to hit someone over the head with one interpretation.
Do you have a single image you go back to again and again as a personal favorite? What is it about the image? Composition, timing or was it in the capture, the moment of shutter release?

I often tell students as they are working on a project that there are “sticky” photographs and there are “stand alone” photographs, both have their functions. Mason-Dixon: American Fictions contain both, the sticky ones are supportive, the stand alone’s are iconic. Even though the project is five years old the difference is still pretty fluid. When you ask what it is about certain favorite photographs, the composition, timing, moment of shutter release, my hope is I can suck my audience in to that moment, to feel me there, the now when all of that collides. When I look at photographs, that is what I imagine, and it’s an electric thrill.

You work in black and white. What is it about the absence of color that illuminates your narrative? 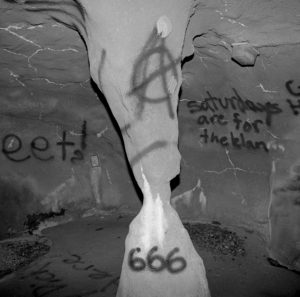 Why black and white? There are several reasons for this, (a)  that I consider black and white to be one step of abstraction away from experience, and more poetic, for me. There are photographers working in color who make amazingly poetic images. (b) I prefer the darkroom to the computer screen as a working environment, (c) maybe most important, I think working within limitations is critically important for creative endeavors. The encouragement that one can do anything with a digital image gives me hives, a sandbox has edges. 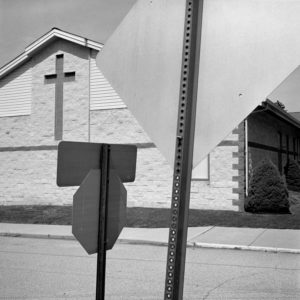 You shoot many images interspersing churches, religion or expressions of faith combined with the local surroundings. I see you also have a series on HolyLand. How does faith play into this work?

On the presence of religious symbols, churches, expressions of faith in my photographs: A simple answer is that churches, crosses, faith expressions are as abundant as the flag. The Christian religion and American pride feel like the warp and weft of the culture within this section of the United States. I’m actually very conscious of how many images containing flags, crosses, gun culture I make. Do I need more, am I saying something new? I grew up in a Sunday Christian family if you know what I mean. Belief didn’t necessarily extend beyond Sunday.

Like many teenagers I ran away from church soon after my confirmation, only to run back to it in Art School when I started reading the bible backward. A fertile imagination and a sense of a world gone wrong took the apocalyptic vision of the book of Revelation and ran with it. I actually took a break from Art school, eventually transferring to study philosophy looking for answers, diving deeply into the problem of evil, time and eternity, the mind/body problem, language and knowledge. Along the way the qualities of an angry, judgmental, there’s only “one way” God were replaced by compassion, grace. If faith enters into this project I would have to say it is not dogma and judgement but the desire to accept, attempts to be compassionate and open, that have cooled suspicious minds, opened doors, properties, and photographic possibilities.

In building a portrait of this region, what would you like us as viewers to walk away from this series with?

“If your everyday life appears to be unworthy subject matter, do not complain to life. Complain to yourself. Lament that you are not poet enough to call up its wealth. For the creative artist there is no poverty — nothing is insignificant or unimportant.”
Rainer Maria Rilke

Observe, and get on with it.

This is the short form:
Co-opted the family cameras in my youth. Who doesn’t?
Studied Photography at the Art Institute of Boston and earned a BA in Philosophy at Calvin College in Michigan.

I’ve exhibited in numerous solo and group shows in Massachusetts, Michigan, New York and NYC, New Hampshire, Vermont, Virginia, Texas, and Toronto Canada.  Personal highlights have been the Danforth Museum New England Photographers Biennial in 2015, 2011, and 2003, Strange Days at Philips Exeter in 2015, A Nickel and a Kopek at the NESOP Center for Photographic Exhibitions in 2008, Calvin College in 2011, and Panopticon Gallery in 2013. My work resides in various institutional and private collections. In 2014 I curated 21st Century Monochrome, an exhibition at the Barrington Center for the Arts at Gordon College, an exhibit created to highlight select contemporary Boston area photographers and their chosen materials and processes.

In 2006 New England School of Photography offered me a teaching position. I’ve never looked back. Teaching has reconnected me with those who are passionate about image making and actively exploring its possibilities. I taught my last class at NESOP in their 2019 Spring semester, finishing up two days before the school announced that it will close in 2020.

I am currently professor of photography at Gordon College in Wenham, MA. and am represented by Gallery Kayafas in Boston.

You can see more of Bill Franson‘s work on his website. 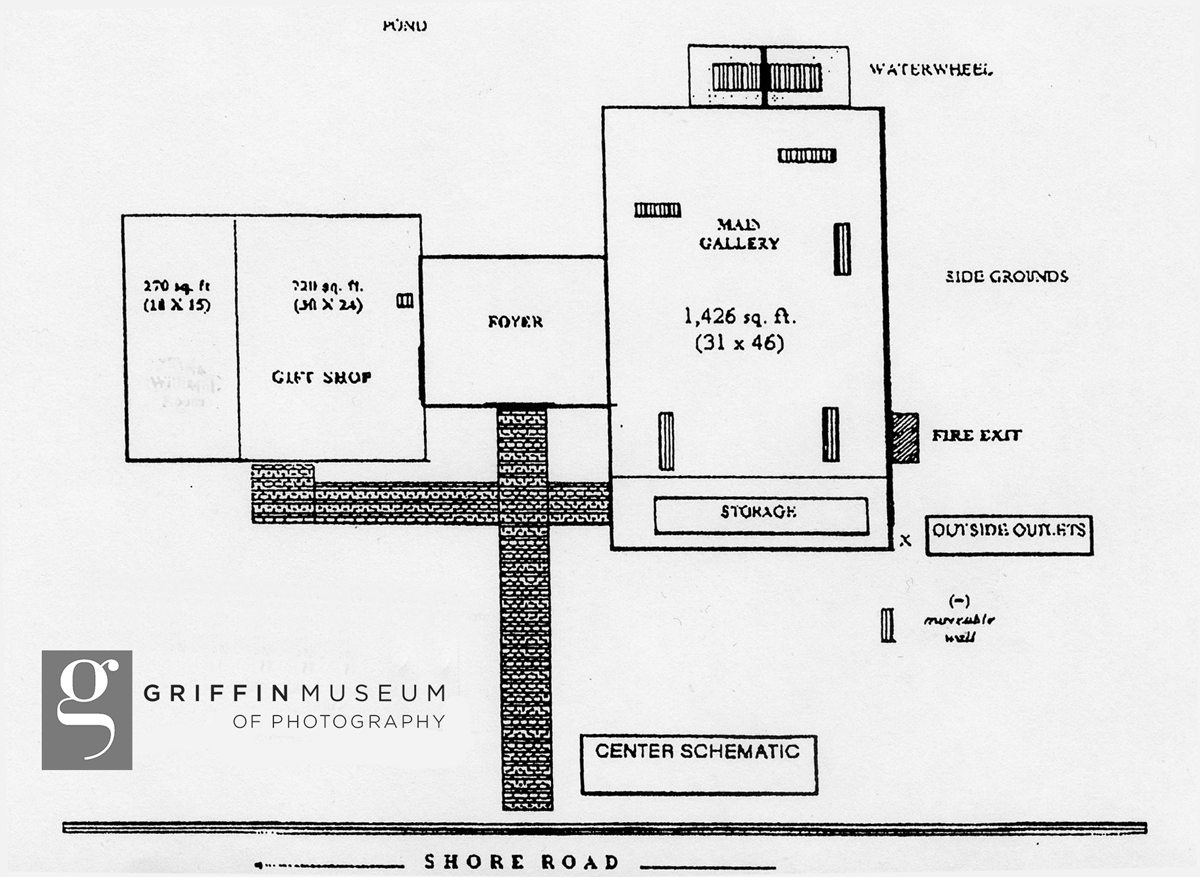